THAT WAS NOT REMY’s 2nd OFFICIAL DISS TRACK. WHO THE HELL WOULD RELEASE  THAT SHIT WITH THOSE WACK ASS DJS DROPS IN IT?! THEY DID THAT TO DOWN PLAY shETHER SO NICKI CAN DROP THIS BULLSHIT! TRUE HIPHOP HEADS NO BETTER! NICKI U NO U FUCC UP DONT U! LMAO??!! 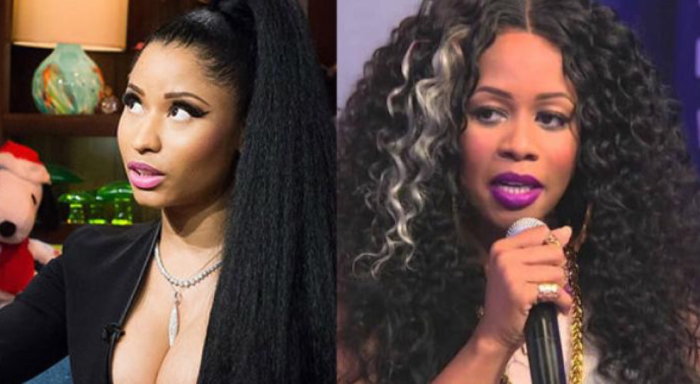 Fans were anticipating Nicki Minaj’s response to Remy Ma’s “ShETHER” and “Another One” diss tracks from last weekend, and on Thursday (March 9) night, Nicki finally dropped her response. Seemingly out of nowhere, the Young Money femcee dropped “No Frauds,” where she responded to Remy.
Nicki raps: Tried to drop “Another One,” you was itchin’ to scrap/You exposed your ghostwriter, now you wish you were scrapped/Heard your p***y on “yuck,” I guess you needed a pap/What type of bum b**** shoot a friend over a rap?/What time of mother leave her one son over a stack?/Lil biddy down basic b**** thinkin’ she back/Back to back, oh you mean, back to wack?/”Back to Back”? Me and Drizzy laughed at that/They say numbers don’t matter/But when they discussing the kings/They turn around and say LeBron ain’t got six rings/I never signed a 360, b**** you wild dumb/That’s why Jay ain’t clear his verse for your album/Shanaynay, you a fraud committin’ perjury/I got before and after pictures of your surgery/Ra took you to her dog, but you don’t look like Ra/Left the opertating table, still look like “nah”

Check out Nicki’s verse up top.