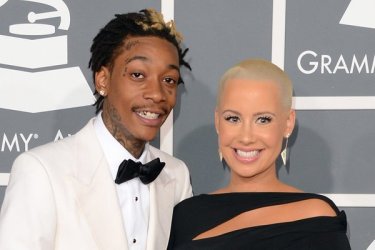 Amber Rose is breaking off another relationship with a rapper. The model/actress/recording artist, who previously dated Kanye West from 2008 to 2010, has filed from divorce from her husband of one year, Wiz Khalifa.

TMZ reports that Rose filed for divorce on Monday and will be trying to obtain “full legal and physical custody” of the couple’s one-year-old son, Sebastian. Apparently, she’s willing to give Wiz visitation.

Citing “irreconcilable differences,” the divorce comes after what TMZ calls a “buzz” of infidelity rumors. The gossip site also adds, “Sources connected with the couple say the split is bitter.”

Watch a TMZ video of “Amber with some guy Tuesday in Bev Hills” below.